When Cricket first began offering cellular and data coverage, the quality and accessibility of service was really nothing to write home about. And how could it possibly have been while competing with nationwide wireless providers like Sprint, AT&T, and Verizon? The private, limited network was only accessible in specific areas and—while the prices were definitely lower than that of other providers—the lack of versatility within the network made it almost impossible to rely on. But in 2014, all that changed when AT&T absorbed Cricket and merged the company with Aio Wireless, and Cricket wireless coverage drastically evolved for the better.

For the last three years, Cricket has been operating on AT&T’s nationwide network. That means that—for a lower price point—customers can choose a plan that works for them and rest assured that the Cricket Wireless coverage area map is the same as AT&T customers. Cricket plans, though, may not be for the tech connoisseur who constantly seeks out the latest and greatest, because the company cannot offer as many device options as the larger competitors. Despite these few drawbacks to choosing Cricket, when it comes to data coverage and consistency of service, a Cricket plan beats any of those provided by a Big Four network.

In this Cricket wireless coverage review, we’ll discuss the benefits and setbacks of using Cricket for your mobile coverage needs.

True Coverage, Wherever You Go 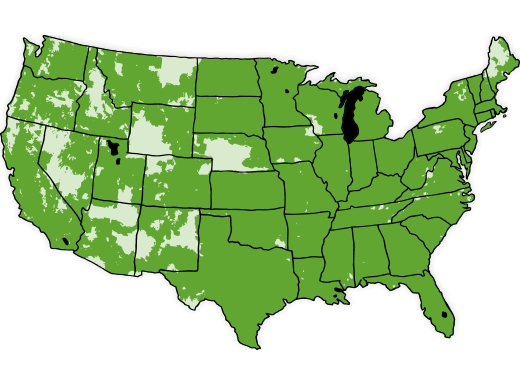 This is true, as long as wherever you go is within the United States. Unlike AT&T’s broader network, Cricket wireless coverage is limited to the continental US and does not allow for use internationally. But if you’re a US resident who doesn’t regularly leave the country, there’s no reason not to consider choosing Cricket as your primary carrier.

When you examine the breakdown of coverage from state to state, the result is really impressive. There’s an expectation that smaller, prepaid services mean lesser coverage, but—since Cricket operates using their parent company’s technology—there are quite literally cell towers everywhere across the country. You actually would need to try in order to find a place where Cricket service falters. While any of the Big Four carriers will guarantee reliable service when you’re in large cities and urban areas, AT&T provides consistent coverage in rural areas as well. This means that Cricket Frequency Bands coverage is on par with other services from the Big Four, granted you are in an area with LTE. Anywhere across the 50 states, you will be able to stream music and stay connected to GPS. Travel with less worry in the safety of a proven network with Cricket. If you are traveling overseas you could use the companies mobile hotspot.

In addition to the continental US, Cricket’s wireless network also reaches parts of Alaska, British Columbia, and the majority of Puerto Rico.

Bang for your Buck

At the end of the day, the primary reason people opt for a smaller carrier instead of one of the Big Four is price. With Cricket, what you see is what you get and what you get is what you pay for. Their prepaid plans ensure customers get exactly the service they need and aren’t charged with exorbitant overages. There are no hidden taxes or fees, and the terms of any contract are easily spelled out and accessible. With the excellent coverage that comes with choosing a partner of AT&T and the transparency and low prices of a smaller company, there’s no reason not to choose Cricket for wireless coverage you can count on.

You can also use your Cricket SIM for another carrier. Note that you should change the APN Settings accordingly. We’ve covered the Cricket Wireless APN settings here.